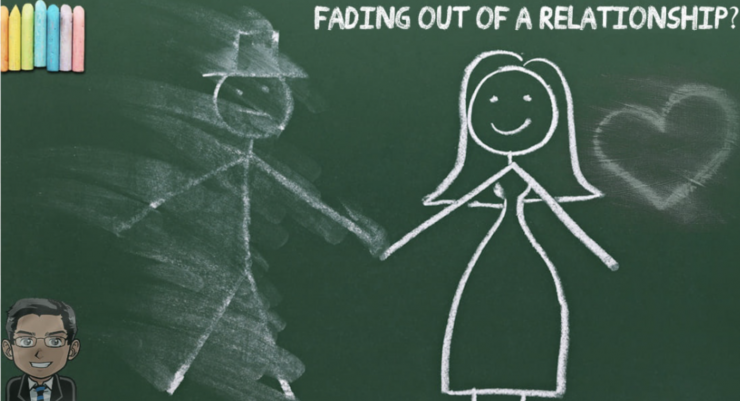 Home » Dating Advice » When is it okay to fade out of a relationship?
DatingDating Advice

When is it okay to fade out of a relationship?

Has anyone you’ve ever dated, just kind of disappeared? Like they stopped responding to your text messages and that’s how you “ended it”? “Ended it” is in quotes because if you end the “relationship” like this, you probably aren’t breaking up anything. It’s more like you probably just don’t ever want to see/kiss/have sex with that person again, ever. And in some cases that’s fine? Or naaaaah?

When is it okay?

So the whole origin of this train of thought is because this KIND OF happened to me recently. KIND OF.

Remember a few blogs ago when the first date I was supposed to go on in months canceled on me and I came home and ate a California burrito and nachos and a blue slurpee and my feelings? If not, refresh yo self What’s the Rush?

Anyways, she canceled our first date, which, SEEMED legit at the time, but as time progressed and she didn’t respond, it became clear to me she was pulling the FADE OUT. The old disappearing act, where the other person just kind of stops respond to text messages.

TANGENT TIME:
But seriously where could she have worked that she “lost” something??? So since I got to Karl Strauss (where we were planning on meeting) on time, I was parked up at the bar and was texting my friend Vic explaining she lost something and might not be able to make it, we came up with some funny scenarios for where she could be working and what she could have lost.

These are just funny scenarios. I know where Sarah works, and it’s in an office. I actually know one of her co-workers, so I know for a fact she doesn’t have any of the above professions.

Okay back to the story:
Yes, I could have sent her another message in addition to the last one I sent to re-confirm the fact that she didn’t want to go out with me, but I’m not a dummy, I get it. It’s clear “she’s just not that into you”. And here’s why I know, had she actually wanted to see me, she would have texted me later that evening letting me know that in fact she did find the whatever the fuck she lost at work, or even the next day apologizing for missing our date. But she didn’t. She didn’t even respond to my open leading question? Which is fine, I get it. Faaaaaade out move engaged.

Which, it’s clear, that she didn’t want to go out with me again, or for the first time rather.

Not a big deal. I don’t really care. If you don’t want to date me that’s fine, I get that, but you’re wrong and I hate you.

Just kidding…We hadn’t even gone out once. She didn’t owe me anything. Not a thing.

BUT then I got to thinking. Maybe she owed me at least an “I’m sorry I made you wait at the restaurant for 45 minutes by yourself, I know we messaged and texted for 3 weeks, I just don’t think I we should meet up anymore. Okay, byeeeeeeeeeeeee” Or something to that extent. Maybe?
This is where I’m kind of torn….

On one hand:
-It would have only of been the 1st date
-We meet through match.com
-We hadn’t even meet in person once

On the OTHER hand:
-The entire courtship was 2 weeks of messaging, 1 week of texting
-She seemed engaged throughout, and excited to meet up?
-She didn’t text me until 15 minutes until after we were supposed to meet, and then I sat at the restaurant for another 30 minutes “optimistic” she would resolve her “crisis” and be able to make the date
-WE’RE GROWN ASS ADULTS WHY CAN’T YOU JUST TEXT ME BACK AND LET ME KNOW

I socialized this idea with my friends to see if I was just being ridiculous in expecting her to text me back, like ever.

I think in general the response was “Yes”. But then this got me thinking, when is it okay to not respond back to text messages or calls. Surely the fade out is okay in some situations? Is it based on the number of dates? The level of intimacy? The age of the daters? I think it’s kind of all of the above. So I made this infographic for future generations, to help them understand, when it’s okay to actually not respond back and when they should. You’re welcome people of the future.

So according to the chart I made, since she’s over the age of 28 she should have AT LEAST text me back and let me know she no longer wanted to meet up with me. Of course, I made this chart, so I could be a little biased.

As always I love to hear your feedback and comments!