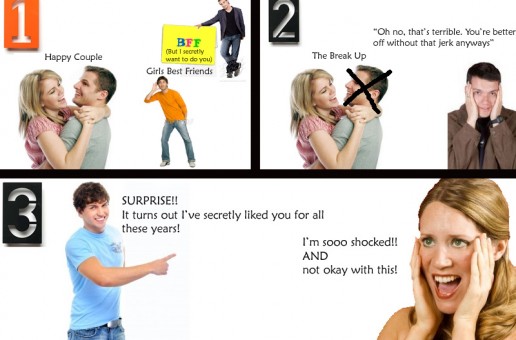 Home » Dating » If we’re friends, and you’re a girl, I probably want to bang you
Word Vomit

If we’re friends, and you’re a girl, I probably want to bang you

Hello. Welcome. Have a seat, I’m about to blow your mind with a bucket of awkward hilarious truths.

I’d like to start off with saying my friends are jerks. Hilarious jerks.Well, not all of them, just like 80 percent of them. I thought my version of an April Fools joke would be to change my Facebook status from “Single” to “In a Relationship”. I know, “ha ha ha”, very funny, fuck you. It’s possible. Anyways, here’s the comments I got from my friends. Jesus! What if I actually DID get a girlfriend!? She would read the comments on my status and probably uppercut me. Is me getting a girlfriend really that far of stretch? I should have just updated my status to read “I’m going to the moon!!” You know it’s possible. You ever seen the movie Might Ducks? Yeah, anything’s possible. Anyways, I appreciate your concern for my facebook status, but that was only a drill. When the real thing comes, we’ll know what to do now.

This blog concept actually was developed out of the blue. I was probably about 87 percent done with a classic Craiglist tool bags post, when I received a random facebook IM from an old friend (ex-girlfriend actually) from a girl named Kacey. Well maybe not completely random because 23 minutes earlier I poked her on facebook. Yeah, I still fucking poke people. I’m five years old, so what. 60 percent of the time, it works everytime.  Anyways, we start catching up, how are you blah blah blah, what’s new blah blah blah, etc. I proceeded to ask her “So I see you’re single now??” (of course I knew she was single, that’s why I poked her, I mean….what, I digress) I then asked her how the “single life” is going for her. Her response was she was having a blast. Whaaaaa. I guess it’s so hard for me to relate to other singles that are actually enjoying being single.  And here’s why, I think it’s because there’s two types of the “Single Life” experiences you can have. 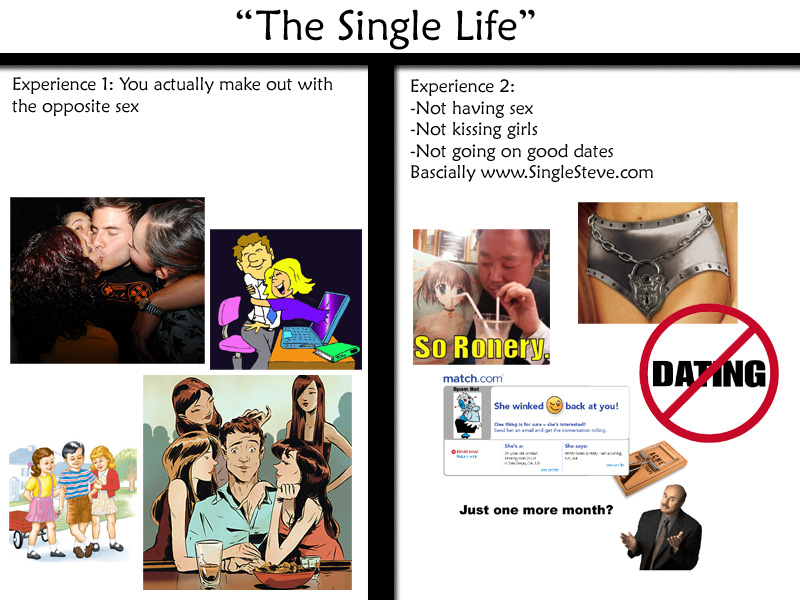 Guess which experience I’m having. “Ha Ha Ha”….fuck your face. NOW don’t interpret this as I think my life sucks, or I’m depressed. Not at all. In fact, I fucking love my life. A lot. It’s great, I just don’t think my “single life” experience is going as awesome as I think it should be.  I’m not saying I want to be sleeping around hooking up with mad hotties, though I wouldn’t be opposed to that, I’m just saying I wouldn’t mind kissing a girl every now and then just to confirm that, yes, in fact I’m still straight.

It’s weird because I feel like you (my naïve readers) think I get more action than I actually do. Which is flattering, but you couldn’t be more wrong if you tried. I was talking to Kacey and this came up, how I think I might be a virgin again just because I haven’t had sex in such a long time, you know medically speaking. She seemed confused by this statement. She mentioned that I should hook up with one of the many girls that “pine” after me. First of all, I don’t know why she used the term “pine”, although she does teach 1stgrade and probably has modified vocabulary because of it, but seriously, pine? I’ve never once heard a girl say “Man I pine after him so hard”, or “I could pine the fuck out him right now”, but that’s not the point. The point is, despite popular belief girls don’t “pine” after me, if they did, we wouldn’t be having this conversation. We wouldn’t be talking about how I haven’t had sex in ….in….in… a very long time. I’m not saying sex is the end all, and I need sex to live, but I wouldn’t mind making out with a girl every now and then. Who doesn’t like kissing? You know who doesn’t like kissing? Bad kissers. I HATE bad kissers. It’s a deal breaker. If you’re a bad kisser, it will never work out. I love how I can just get off on side tangents and rants because it’s my blog. For example, I just remembered awkwardly, that I found out my parents apparently read my blog. Awkward. How awkward that I just mentioned I haven’t had sex in a long time. How awkward that they might be reading this sentence right now. Exactly. Maybe that’s my problem, I make UML diagram to explain to people if I would bang them or not. Being an engineer is not helping me get laid, that’s for sure.

I’m not saying this, like I’m a super creep who wants to hook up with all of his friends, but I’m saying, if you’re my friend, and you’re attractive, I’m probably not going to stop if you said you wanted to make out with me. I’m just saying. ALSO I don’t think I’m the only male who feels this way about his female friends. In FACT, I would go as far and say that this is probably the norm.

I’ve actually seen this myself with my own eyes, I’ve got a scenario for the ladies and I bet either you have experienced this or know someone that has I recently heard this exact story from a girl friend of mine, that she just got out of a relationship, and within the month, a guy she thought was just her platonic friend, confessed his secret love for her. It happens. And I’m not going to lie I’ve for SURE been that guy once, twice or 12 times. It’s pretty much my M.O. It’s my fault, it’s because of my philosophy on relationships. What’s my philosophy you ask? Well, not to get too deep into it, because this shit’s supposed to be funny, but, basically the type of relationship I’m seeking (eventually), is the epic love relationship. And IN MY OPINION I feel like my best relationships are basically best friendships, with sex. What does that mean. That means I want to develop a relationship out of friendship, because the best marriages I’ve seen, the couples that are still very much in love after 20 years, are basically best friends, as cliché as that sounds. That’s why I hate online dating so much, because you focus on building a “relationship” with a complete stranger, not necessary a friendship. Anyways…

You’re probably thinking, but Steven, I’m a girl, I’m your friend, do you want to bang me? The answer is yes. I mean no. I mean it’s a maybe? I don’t think I want to bang you, I only said bang for dramatics mostly, but I do think that on some level male and female relationships do have a physical attractiveness component to them, no matter how platonic you think your relationship is.

Also stop freaking out, this doesn’t change anything, between you and I. I mean somehow magically we’ve been able to not make out for all these years, I don’t think knowing this information actually changes anything.

Here’s my challenge to all the girls out there that think this is just my own crazy idea about the female and male relationship. I challenge you to ask your “platonic” guy friends, that you think would never think about you in “that way”, something to the extent of:

Wait for the awkward pause, see what their response is. Some guys might think you’re coming around and you’re finally asking them out.
I realized I used to the word bang like 100 times in this blog, and I giggled every single time.
Let me know if you agree/disagree or if you had an experience with this.
Let’s be friends!!

Speaking of friends, my annual bar crawl birthday event is planned and in works. April 24th in Pacific Beach, SAVE THE DATE! It’s the 3rd annual and going to be a blast. If you live in and San Diego, and you’re interested in coming (and we’re not already “real life” friends) shoot me an email Steve@SingleSteve.net. I’ll send you the details, and let you know how to get a shirt. I’m always up for making new friends!

A Blog About A Blog