Dating Tales of the Hilarious Kind
Home » Dating Advice » How To Get Kicked Out Of Moondoggies…again?
DatingWord Vomit

How To Get Kicked Out Of Moondoggies…again?

Life continues, and so does the adventure. This week has been a blur to say the least. I’ve been trying to write this blog for a while, but drinking keeps getting in the way. 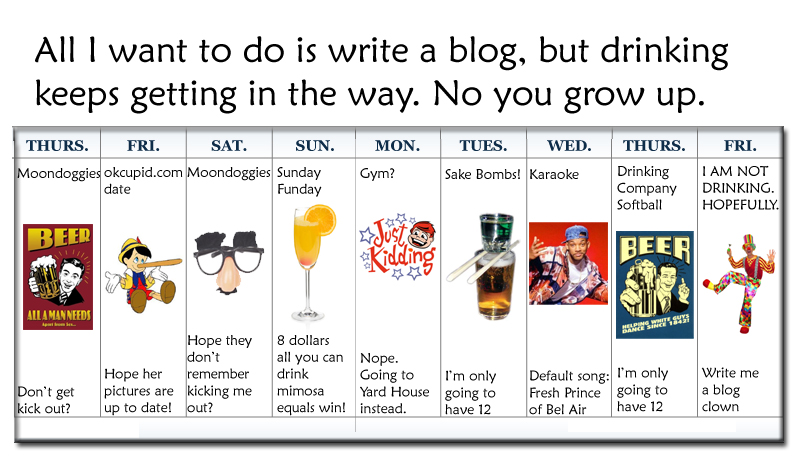 It’s been a busy week, my liver, wallet and sense of responsibility all hate me.

How to get kicked out of Moondoggies, again…..

You’re probably thinking, “Now Steven, haven’t I heard this story before??” No. Shut up, you don’t know anything about me. And yes, I have regaled you with a story before of how I got kicked out of the ever classy establishment that is Moondoggies on a Thursday night, but believe it or not it happen again. And again, it wasn’t my fault, well it  mostly wasn’t my fault.

Here’s the story about the first time

So anyways, I’m 1 to 2 to 7 beers deep at this point, and anyone that knows me, knows I have the bladder of a 12 year of girl. I pee approximately every 17 minutes when I’m drinking. I should probably see a doctor, but I figure it’s actually some type of super power right? I mean my body has the ability to process beer into pee almost instantly. But I digress…..So I’m line to pee, again, probably about 4 people deep outside the entrance to the actual bathroom. My friend Tyler gloriously walks out from the bathroom, says hello, and joking says “Don’t pee on the walls like last time, try not to get kicked out”, we laughed, he walked on. I’m now 3 people deep, doing the pee dance when a guy in the typical “PB Douche” uniform (dark button up shirt, stone washed jeans and backwards black hat) starts making his way to the entrance of the bathroom, disregarding the 6 people deep line. In my head I’m thinking “Alllll hell to no!”, and of course it’s just in my head, because I’m super passive aggressive. As dude walks by he trips on my foot, and stumbles a bit…….JACKPOT…..my opportunity to slide in a sarcastic snide comment, since that’s the only thing I’ve got going for me in this situation as he’s about to cut the line to pee. I sarcastically and smugly tell this douche attempting to cut the line, “Wow, drunk much?”. He cuts back, making a B line straight towards me and says “Excuse me, what?” in a very inquisitive voice. At this point I’ve got some liquid courage in me so I responded like I was talking to my 95 year old great grand mother. You know the style, where you talk slower, and louder and nod your head to ever word. Yeah. I did that. I came back with “WOW…….DRUNK…..MUCH?” Ha. Take that line cutter, I’d like to see him come back with something half as witty. What was his response you ask? His response, kind of caught me off guard, he responded with “That’s it you’re out of here!”. It caught me off guard because I didn’t know random line cutters could kick people out of the bar. Was he making like a citizens arrest, but of people in bars? After further investigation and better lighting I noticed he was wearing a Moondoggies “I work here” type if shirt. Fml. I’m no rookie to Moondoggies, that’s why I know the bar issued uniform is a tan short sleeve button up shirt, but this guy must have worn his other shirt today. Of course. Next thing I know I been shoved through the dance floor, flash light shinning on my head, all the mean while I’m trying to finish my Dos XX before I reach the door. I was tossed. Ejected. Laughing the entire time. All before 11:30pm. Only me. Only Moondoggies. Worst part is, I still had to pee, bad. I got 24 hour Mexican and called it night.

“I thought you would be white”

Two nights later I was out in PB once again, hanging out with some friends at Moondoggies. Actually there was a streak of 6 days last week where I had been to Moondoggies for drinks for 4 of them. No. You have a problem. Anyways I was at Moondoggies,  when I got a tweet from @mikeythejerk

Mike’s a cool kid from my MBA classes, seems to be out and about in PB more than me. Respect. So those of you not familiar with twitter, the tweet above also included a picture in the message, so I opened up the picture. … 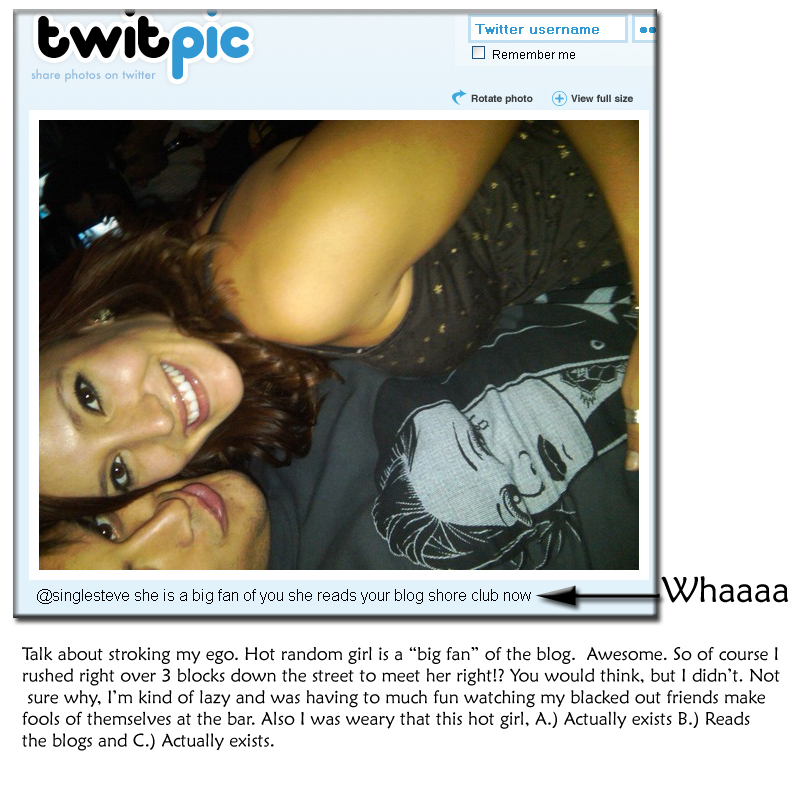 I continued with my night, regretting I didn’t go meet up with Mike and said girl at Shore Club. Especially since I love me some Shore Club.  I was walking to my car down Garnett and I hear a guy yell “Single Steve!” I turn and see Mike’s friend Nick, I’ve met before at a bar crawl. He’s stumbling down the street with this taller, attractive girl, he introduces me to her as “this is Single Steve from the blogs”, she lets out a small excited scream and gives me a big old bear hug. That’s like 3rd base in my book. She introduces herself as Sarah, she’s nice and bit tipsy.

Ah ha! This was the girl from the photo earlier!  She does exists! And…. she’s a lot taller than I expected. Well, taller than me. I’m only 5’9, so that’s not really hard to do.

Sarah and Nick are embracing, and drunkenly swaying, Nick and I start talking about blah blah blah how was night, blah blah, when Sarah sways over in my direction, still hanging onto Nick for balance and says “You don’t look like I expected you to”. Hahaha!

What!? I asked her what she expected me to look like, she said “I thought you would be white”. Again, what!? Ha! I guess my blogs make me sound white? I feel like I drop the “I’m Mexican, ole!” joke, every now and then. At least enough so people who don’t know me in “real life”, would gather I’m Mexican? Or maybe she assumes Mexican’s aren’t as funny as white people. Which might be true. Which would make sense, because anyone that knows me, knows I’m the worst Mexican ever.

Then she starts talking about “I’m attracted to Single Steve, but not Real Life Steve”, haha! That’s literally, literally a direct quote. I wasn’t upset by her drunk honest comment, I was actually pretty flattered. I mean she’s attracted to this “Single Steve” character she made up in her head, who was white, probably taller and really funny. I actually feel bad I ruined her perception of this Single Steve she made me out to be in her head, by meeting Real Life Steve. Oh well.

And this point I made my exit, wondering how many other readers think I’m white? Or have some other perception of me of what I might look like, or how I would act in real life?

Speaking of twitter, you need to follow me. Not just because I’m an egotistical asshole and the more followers I have the easier I go to sleep. It’s because if you want to know the real Single Steve, I highly recommend it. I tweet many many times a day and mostly without a filter. Where my facebook status are extremely filtered and occur one ever two days or so.