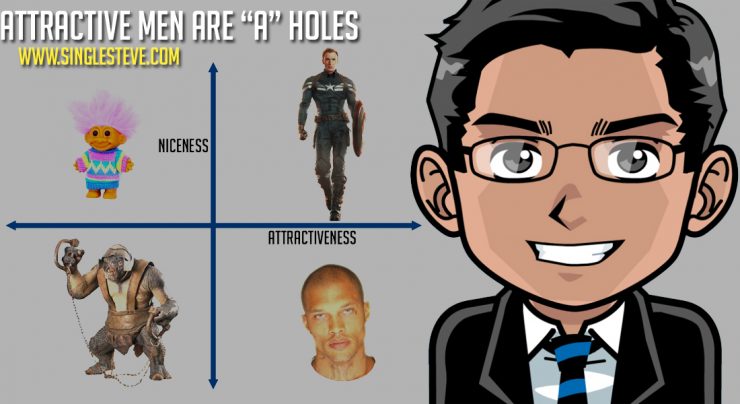 Where to begin, where to begin….this is either going to be one of the smartest things I’ve ever written, or a couple hundred words of pure word vomit that everyone hates.

I guess I’ll start off by saying this blog isn’t going to be as biased as you may think. Biased in the way that I’m an unattractive troll that lives under a bridge and hates attractive guys. JUST KIDDING. I don’t think I’m actually unattractive, and believe it or not this post will have nothing to do with my attractiveness level. This post actually stems from a conversation I was having a female friend who was telling about this new guy she had just started dating. She was telling me about how she was having some reservations because the last time (and one of the first times) they hung out she had identified some “Strikes”.

And I’m only using this one specific example, as a seed for the idea for this blog. This is actually a re-occurring theme I’ve noticed with many of my female friends. My female friend from the thread above is attractive, smart, funny, and sassy, and I have no doubt she won’t put up with a  guy that doesn’t shape up…but, but there is that moment of “but he’s so prettyyyy”.  We all have that moment, and that moment is a natural emotional reflex of compromising. It’s completely normal to rationalize and compromise, at least initially (granted I’m an engineer who writes an online dating blog and I know nothing about normal human interactions).

What’s not normal is being an ass clown in the first place. And…and that’s what I hope to prove in this post through a series of logical arguments. Yes, logical arguments, as to why attractive single guys are assholes. This post is going to explain why the available population of single men are assholes. The NEXT post (maybe, depending on how much you hate this one) will hope to explain why they are, and can be assholes. In summary, this post is “why are the only guys left to date are assholes” and the next post is “why can they be assholes”.  And look, when I say assholes, I don’t really mean assholes, it was just a catchier title than “Attractive Guys That Are Still Single And Over 30 Are Usually Jerks or Have Some Type of Social Dysfunction About Them, Statistically Speaking”.

So, before everyone FREAKS THE FUCK OUT let me set some ground rules. Attractiveness is all relative, for sure, different people find different things attractive. But I think in general according to the masses there is a definition of who is “attractive”. For example, most people think Chris Pine is attractive. Not all, but most. This is the definition I will be using when I use the word “attractive”.

No, not all attractive guys are assholes. BUT the single ones that are over 30…might be.

Here’s why are guys jerks:

Assumption 1: I will use males over 30 as the dating population in focus, as the average age for a man to marry is 29 (according to 2019 data). And all of my friends seem to be dating guys at that age, and this is where I get my observational data from.

Assumption 2: The entire world’s dating population of me can be divided into 4 categories.

Category #1 – We have attractive and nice types, the Captain America’s of the world.
Category #2 – You have the attractive and not nice, for example that attractive mug shot guy.
Category #3 – Here we have the unattractive, but nice. Kind of like treasure trolls.
Category #4 – You don’t want to be in this quadrant. These guys are trolls and jerks.

Of course this is a gross over simplification, and there’s a lot of gray with definitions of nice and what’s attractive. I get it. But bear with me the purposes of this post.

Fact 1. I think we can all agree attractive people are more desirable right? Desirable to bang, to date, and to marry.

Fact 2. “Nice” people are also more desirable to date, and to marry. And “nice” is a bucket term for everything else that isn’t physical (funny, smart, charming, nice, and all the other qualities you look for in a mate).

Are you still with me? Or are you currently screaming at your computer scream about how wrong my assumptions and math are?

And so why did I just do all that? A lot of my single female friends give me insights into their dating lives and ask for input, help or opinions. And honestly MY MIND IS BLOWN when I see some of their ridiculous interactions with these guys. Or when I hear about some of the absurd things that happen during the dates. I think to myself, HOW IS THIS MY COMPETITION!? And so I tried to figure out, how this was possible. How do all these guys seem to have the emotional intelligence of a rock? And so, as a man of science, and logic, I tried to figure out HOW the FUCK it was possible that a great percent of these guys my friends are going out with, are clowns.

And so the common theme was, yes, most of these guys are attractive. So I started there and worked backwards, and came up with the above theory as to why my friends seem to be having such awful luck with guys on match, okcupid and tinder.

Here’s the take away, I am not encouraging my friends, or you, to date un-attractive people. Like not at all. All of my friends deserve Hottie McHotties, for sure. All I’m saying is….good luck. There is ABSOLUTELY a chance you will meet a hot “nice” guy, absolutely. But, unfortunately there is a greater chance you will just meet another hot jerk, statistically speaking.