How to Write the Perfect First Message

Okay, I’m just going to admit it, and come out and say it. The first thing you read in the post was a bold face lie. I don’t actually know “How to Write the Perfect First Message”, and since I’m being honest. I need this, no, WE need this to be a PSA for guys of the internet who are doing online dating, on how to send a first message. If I was being honest with the title of this post, I probably would have called it something like “How to write a good first message according to what Single Steve thinks is a good first message, but I’m not really sure you should take my advice because I rarely get responses to my messages”. So, as you can see, it doesn’t really have the same ring, or appeal to someone searching on how to write a good first message for online dating.

I decided to write about this topic for two reasons.

Since I write a blog about the good, bad and funny of online dating, a lot of my female friends send me a lot of their good, bad and funny interactions from online dating. Most of them falling into the bad and funny categories. It’s actually slightly enraging to read some of these messages that these guys are sending to some of my female friends, only because all I can think is “HOW THIS IS MY COMPETITION!?”. Especially when I receive screen shots of first messages like the one below :

“I enjoyed learning about your likes and accomplishments”

Then why didn’t fucking mention at least one of them?!

Unless, unless you didn’t actually read her profile and you just copy and pasted that message. Again for the 17th time tonight?

Yes, yes you would.

But she also wants to be with someone who knows how to rotate a picture 90 degrees at the age of 26 years old. You might as well of asked “Do you breathe air?” Or “Do you want to date asshole?”.

Just because you said “I viewed your profile” doesn’t;t mean you actually did.

For example : I made out with a girl last weekend”, that doesn’t actually mean it’s true.

I can’t even. I literally can’t even. I just don’t understand. Like, when guys send these messages do they honestly think that the women they are sending them to don’t know that these aren’t just copied and pasted messages and sent in masses to lots of different women. I mean, they must not right? They must think they are so fucking clever sending these copy and pasted messages to lots of women a night. That, somehow they are “beating the system” and not really having to do any work, other than craft a single super generic message and send it out dozens of times. Because if they actually thought that the women they were sending the messages to knew that these were generic messages, they wouldn’t be sending them right? OR do you think these guys just don’t give a fuck and actually want to attract the type of woman that also doesn’t give a fuck that they didn’t actually read your profile?

Public Service Announcement To The Men of Online Dating

Every time you send a generic cope and pasted message to a woman on online dating, she loses faith in the whole male population just a little more. Dont’be a dick, don’t copy and paste your messages to the women of online dating. You’re ruining it for everyone else.

They’re not as dumb as you.

Maybe we can make this a thing? Like next time a guy sends you a super generic message on online dating you respond with nothing else except a link to this post, letting them know, that you know, his message was a piece shit.

How to Send A Great First Message, According to Single Steve, Who Never Gets Any Responses

So now I’m going to share with you how I craft my messages that I send on online dating. I don’t know if I’m exactly qualified to do this, because my response rate is about 15%, but I consider myself above average emotional intelligence and understand, at least in theory, what women would like in first message. I think?

And like anything in my life, I probably approach sending messages on online with a little too much “engineering”. Meaning I have objectives that I try to meet with each message that I send.

Objective 1: Prove that you have read her profile

Example:
“That’s awesome you teach 6th grade! I loved 6th grade so much, I took it twice!”

Objective 2: Show we have similar interest/things in common

Okay, you’ve proven you’ve read her profile, now you need to demonstrate you actually have things in common. Mentioning shared interest helps create the buy in, she needs to relate to you.

Example:
“OMG You love Starwars too!? I once dressed up as Luke Skywalker for 6 months straight, prior to the release of the Star Wars: Episode III Revenge of the Sith!”

The goal is for her to respond back to you right? Well in order for that to happen, you have to ask her questions. Preferably, open ended questions, in regards to her profile. She will be more likely to respond if you ask her about something mentioned in her profile, as opposed to a random question you want answered.

“I see you’ve run a couple marathons, that’s awesome! I’ve actually ran two as well. Are you currently training for another run? What’s been your favorite race you’ve run so far?”

“How many kids do you want?”

“I noticed in your profile you didn’t mention your credit score….what is it?”

“How many sexual partners have you had?”

My examples are jokes. Calm down. BUT WAIT, there’s more.

Other tips on how to start a conversation on a dating site:

Here are a few screen shots of a few of the last messages I sent out. I love feedback, as long as you’re not a dick about. 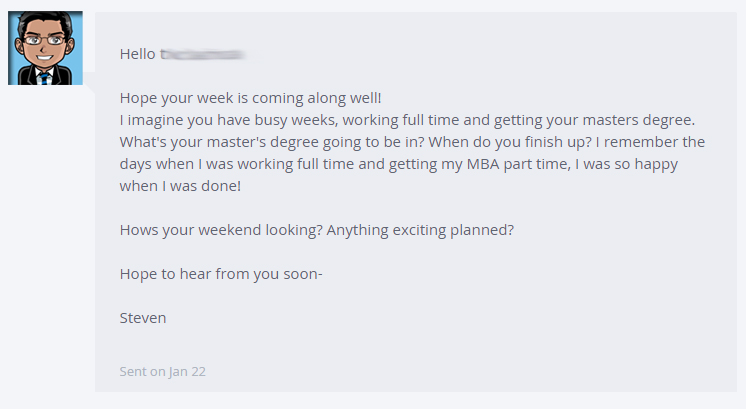 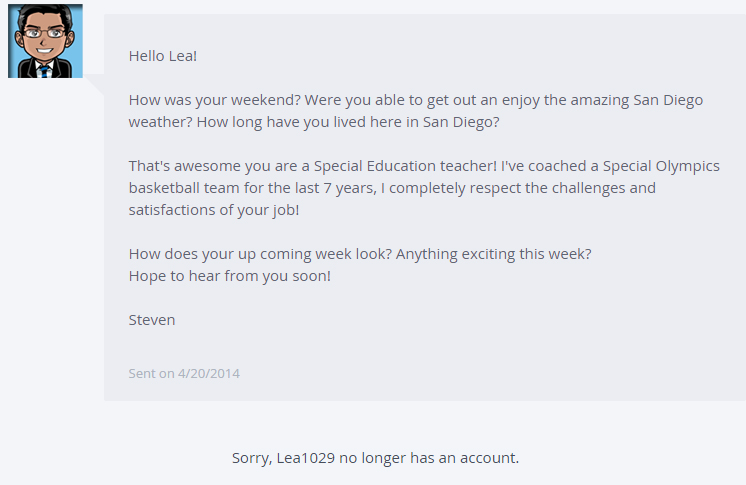 How to approach a girl online?

Also, I assume what I write actually matters. I assume that I should actually be TRYING to write a quality message because the content of the message is actually going to be read and weighed in the decision process of whether or not she will be responding back to me.

It’s actually kind of why I’m writing this post. Be honest, does it fucking matter?

And if it doesn’t, that’s fine, I get it, the attractive guy who just writes “hey” will get a response, only because he’s attractive.

BUT, here’s what I offer as my two cents of advice:

Women, you should absolutely only respond to guys you find attractive, but beware of ANY guy who won’t even spend 5 minutes to read your profile and send you a personalized message. It COULD be a tell-tale sign of things to come in the relationship. What’s to make you think he’s going to spend 5 minutes in making sure you’re having a good day, or 5 minutes to do something else thoughtful?

I wonder how many good, lasting relationships started with a copy and pasted message he sent to 15 other women that same night. You were just a number in his numbers game, he just happened to be attractive. If you respond to “Hey”, don’t be surprised your relationship is nothing more than “Hey” level. You, deserve, better.