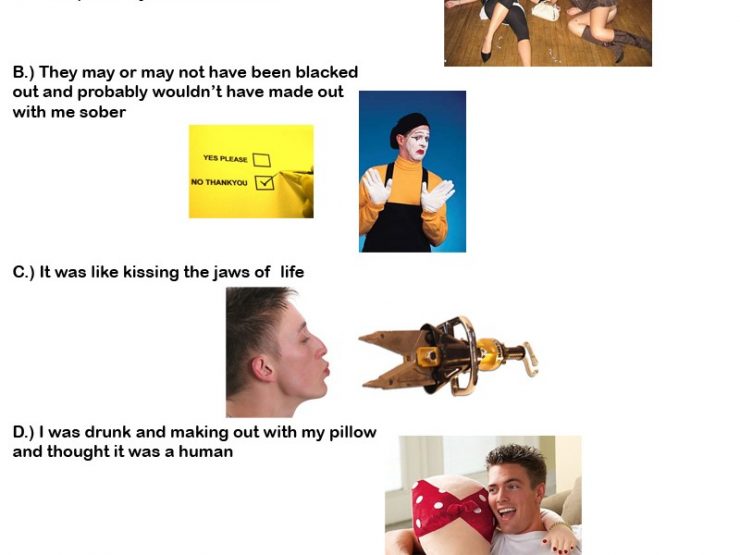 Hello world indeed.  I know, I know, I know, it’s been a while, blah blah blah. It’s the usual, you’re angry, I have some lame excuse about being busy, let’s just skip that whole paragraph where I apologize then lie to you and tell you I promise I’m going to write more. Deal? Deal. But I have been itching to write, I have so many ideas and stories to tell I don’t even know where to begin. I hope you’re as excited as I am. Let’s begin.

So I’d like to tell you about the time I kissed a girl. I know doesn’t sound like a big deal to some of you, but please consider the following…this blog is called Singlesteve.net, not IgetTonsOfAssSteve.com. As much as we would both like for the blog to be about the plethora of girls I go on dates with and bang, sadly it’s not. It’s about the 4 failed dates a year I go on, and then I have to awkwardly find other creative ways to fill the blog for the other 361 days. But I digress. 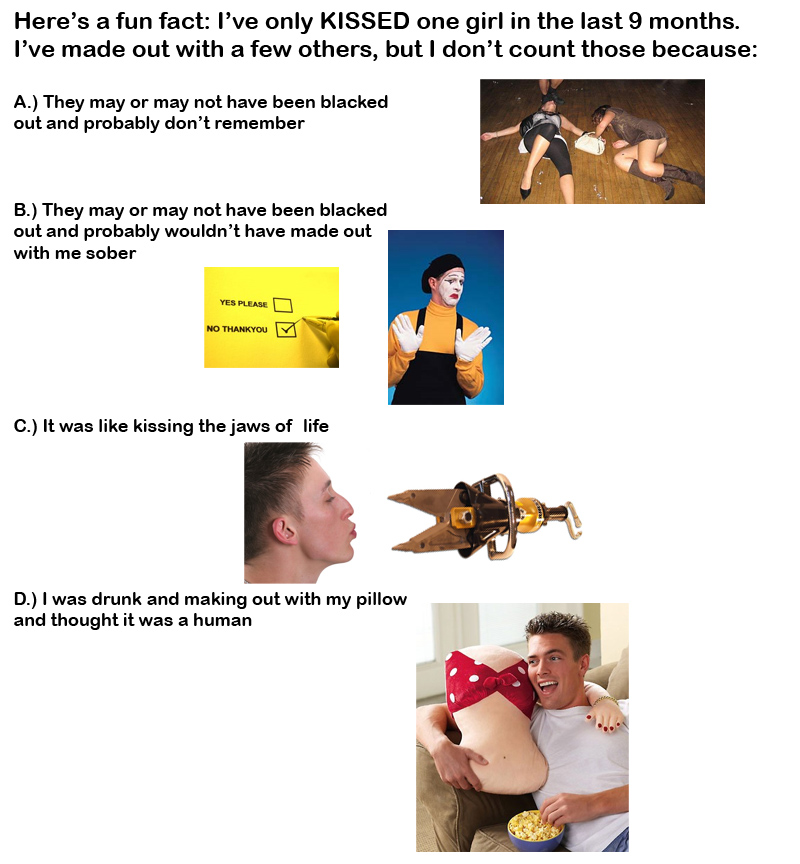 I don’t count those other girls for one or many of the reasons above. Especially the one where it’s actually just me making out with my own pillow.

I. Me. Steven. Actually went on a successful date recently. Well 2 weeks ago, but still recently enough. I remember it clearly because it was my people’s national holiday, Cinco De Mayo. Yep, it’s a big deal to us Mexicans. I think it’s the day Mexican Jesus was born right? Anyways, let’s talk about how this date came about, how it went and where it went.

You’re probably thinking, “Hey Steven! Slow your roll homie, aren’t you going to ruin any mad game you might have with this girl, by blogging about it, for all 12 of your readers to read!?”
First of all, you talk like a fucking idiot, “Slow your roll homie”, “mad game”!? Who says that? This is why were not friends in real life. But… good question. And I’m 12 steps ahead of you, it turns out I’ve already ruined any “mad game” I might have had with her BEFORE even blogging about it. I mean, she can’t double dump me right? So there’s no harm in blogging about it at this point. I mean she can stab me for blogging about it, but I’m not too concerned about that. . . .

So, like how many relationships started, this one started by meeting her at a bar….just kidding we met on twitter. I know, awkward right, how do people even “meet” on twitter. Well, I think she started following me, I noticed that her 4 pixel by 4 pixel avatar picture was attractive so I decided to start following her back.

Exco facto, we tweet back and forth at each other, we exchanged match.com profiles and we decide to set up date. We were both ridiculously busy, and it turns out the only time we can meet up was on Cinco Da Mayo. She also lives up in Anaheim area….so we decided to meet half way in the middle in San Clemente.

I google this sweet seafood place right on the peer, according to the interwebs it was supposed to be awesome. So I suggest we meet there.

During the day, we both tweeted, how excited we were about meeting up tonight, like teenagers. We told the entire internet our excitement, we didn’t care, who knew it. Got me excited about the date, we met at the restaurant, right on time, right as expected. Greeted her with a hug and we were escorted to our table outside, under the heat lamp, right over the ocean, things were going pretty cliché at this point. I was totally prepared to order a bottle of wine per protocol of being on a first date, when the waitress handed us the wine list, but date suggested we get a beer instead. I was totally down. And then when the beer came out I was on my best behavior and poured my beer into the chilled glass provided, date drank straight out of the bottle, I was down.

We’re talking, have a great conversation, joking laughing, things are going great. I didn’t tweet ONCE during the whole date, she did ask if I were to tweet right now what would I tweet….I responded with:

“Beautiful view, beautiful company, dinners on its way out”

Pretty suave right? I thought so. Dinner was excellent, afterwards we decided to continue out cliché date and go for a walk on the beach. About 14 feet into our walk, I go for the hand grab, SUCCESS! We hold hands, walk along the beach barefoot with shoes in hand, talking about how cliché this is. Things are going pretty good, I thought. We find a bench to have a seat at, when I see a window to go in for the kiss. BOOM.

So side note, you probably think I don’t make out/hook up with a lot of girls because I’m too picky. False. I will make out with anything that gives me the window to do so. And I mean anything.

Anyways I see a window, and go in, BOOM, yeah, that’s the sound of kissing. Well at least when I kiss. It’s pretty epic. I would say that’s its one of my better skills, it’s up there on the list, right next to public speaking. We start making out, like teenagers, on this bench, on a Wednesday night, as people are jogging by and walking around the beach. I don’t care. F it. I don’t live in San Clemente, who’s going recognize me. We are literally making out like the Titanic is going down, then we gradually (rapidly) move into an awkward state of dry humping. Only awkward because we’re sitting side by side on a bench. Awkward also because I’m a 27 year old man, and who dry humps anymore. I haven’t dry humped that hard since I was 17 in the back seat of my Chevy Cavalier. I’m used to going from making out to sex, since becoming an adult. This isn’t high school where you have to obligatory go through the 12 steps of groping before you can get naked. In high school, everything was so sequential. You had to first grab her boob over the shirt, then under the shirt over the bra grab, then awkwardly under the bra with the bra still on, THEN you could take off her bra. This process probably took 3-5 make out sessions if not more. If you went straight to taking off the bra, you would for sure get slapped. Am I right? Or did everyone just date super sluts in high school and I missed out. But I digress…..focus.

We attempt get up and leave before the situation gets “out of control”, but as we walk along the beach this only prompts more dry humping like it’s our last day on Earth. Hey, I’m not complaining. I’m just saying, also I want to see how many times I can use the word “dry hump”. I think I’m going to try and bring that into my everyday vocabulary- “I just dry humped the shit out of those engineering test procedures”

Anyways we finally decided to stop dry humping and make our way back to our cars. On our walk back she realizes she’s missing both her earrings, yeah, I guess we really were going at it pretty good.

As we’re leaving, we try to coordinate we can we meet again. She invites me to come up on that Friday, but I had visitors in town and couldn’t make it up.  We leave it open, both with the impression that we would like to meet up again soon.

Great date, I haven’t had a date go that well in long time. I mean it seems like she likes me right?
Here’s a time line of her tweets, to further highlight my case for me thinking she likes me. Yeah, so things are looking pretty good right? Wroooooooong. Didn’t even go on a second date.

Why we aren’t banging now:

Good question. Well, maybe not banging, but why didn’t we even go on a second date? No idea.
We were attempting to coordinate plans for the next couple days, I thought things were going great until I got this email. 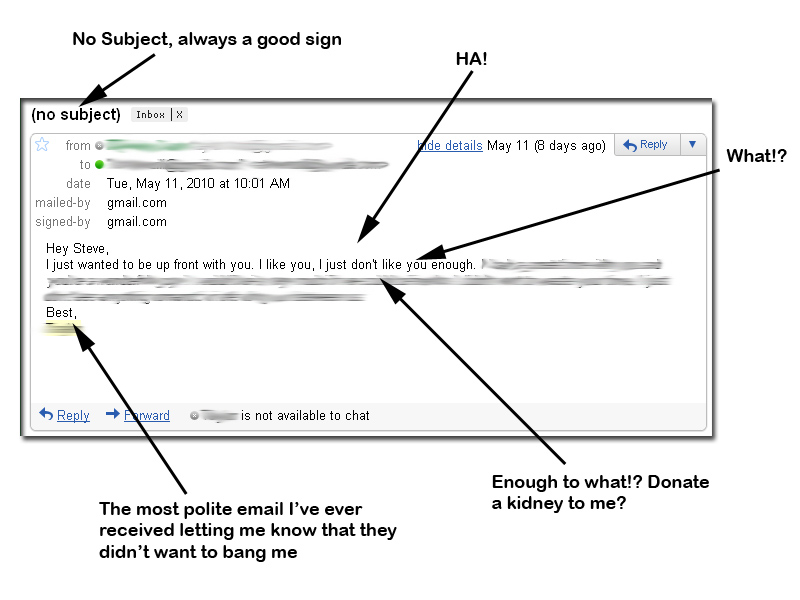 Haha! Hilarious! I laughed out loud in my cubical at work for probably 5 minutes. I blurred out the rest because I just wanted to share with you that one line, and not dig too much into her privacy.

I’m not upset about the email, or about her not liking me “enough”, not at all. And to be honest, I don’t even think I would of even  have wanted to “date” her, but I wasn’t against banging her, but I guess both of those are out of the question now. Ha! Especially after I write this blog, and she’s reading it right now. Eh, like I said, she can’t double deny me. I know she was doing the honest thing and telling me up from, which is great, and I appreciated, but was just kind of comical how it went down. The streak continues!

Now that I’ve scared off any girl that might potentially ever want to meet me because she fears she might end up in the blog, I am going to be writing more frequently. Check back soon. Also invite your friends to the facebook fan page and to read the blog. Since I’m not getting paid or laid to write these blogs, it’s the least you can do.