How not to date the Cute Funny Girl in your class

Imagine, a dimly lit library, smelling of rich mahogany, me, wearing a satin robe, smoking a pipe, slowly rotating my swiveling plush chair towards you.

Hello, salutations, greetings, please, have a seat, stay a while. And welcome to another awkward edition to my blog. 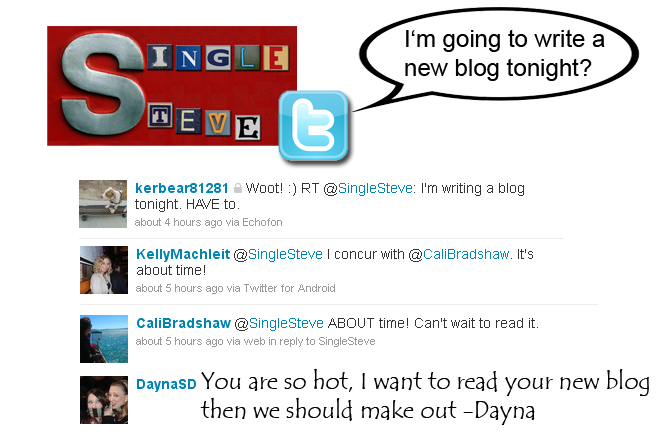 I’m just kidding, I REALLY appreciate my readers, a lot. In fact, it’s still really weird that people (1 person) even reads this blog. It’s mind boggling, but I’m glad YOU do.

Anyways let  me tell you about a more recently happenings in my life. So I know most of you don’t follow me on twitter, because you think twitter is dumb, well you’re dumb, but you should follow me at twitter.com/SingleSteve, I tweet mostly nonsense all day and sometimes double nonsense when I’ve been drinking. Anyways, if you WERE following me on twitter, you would know that every Wednesday night, I have 6 hours of MBA classes at SDSU. And every Wednesday  I complain about school and how much I hate being in my 2 classes, yada yada. AND every Wednesday I mention how I sit right behind this girl I’ve so cleverly nicknamed “Cute Funny Girl”. You’ve guessed it, she’s cute, she’s funny, and she sits right in front of me. Actually for the first month, I sat on the other side of the room, but I strategically moved myself a few weeks into class, once I overheard her witty-ness interactions with some other classmates. Moving across the room is not creepy, shut up. It’s actually kind of funny, even in grad school, 99.8 percent of the students will sit in one seat on the first day of class, and will sit there for the whole semester. Like it’s assigned seating in second grade. Yeah in second grade you weren’t allowed to move chairs next to Slutty Sally, instead you had to sit next to Stinky Sue. So WHAT, I wanted to sit next to a funny attractive girl, it’s called product placement. I learned that in one my MBA classes, look it up clown. Anyways, the day, literally the day, I product placed myself behind her, we kicked it off. Immediately. One liner sarcastic comments one after each other, back and forth, regarding class, our ridiculous teacher, or the bore-fest that is Managerial Economics. Her personality reminds me a lot of Dee from It’s Always Sunny in Philadelphia, if she was a real person. Anyways, week by week, our friendly banter goes on and on, some might even say it’s flirting. I, of course, find none intrusive ways to test her current relationship status, for example, she came to class one day with scratches on her arm/wrist area, and I made some comment about how if she was trying to kill herself she should try going with the veins, in a funny, I don’t think you actually are trying to kill yourself way. She laughs and says her cats really did a number on her. I said, oh, are you the Single Crazy Cat Lady? Which one of the 22 cats you own was it? She says single yes, crazy cat lady….not yet.  So it was established, I thought, clearly she was single. And for the next weeks after, we kept the banter, kept the jokes, made many references to our single hood.  The weekend before the test, was the weekend of my EPIC bar crawl birthday celebration, which I invited her too, but she declined so she could study for the exam with a study group on that Saturday.  Reasonable excuse.  So at this point we’re texting back and forth, 100 percent in relation to school.

So you know when you first start liking someone, you are EXTREMELY careful with the wording and diction of each text message sent? Or at least I am. You know, you want to be double surely sure, you are coming off funny/witty/interested or whatever the message is supposed to be. Or am I the only one who has this neurotic behavior? Anyways to this point, I had been spot on with our communications. Skip forward to the weekend. Birthday bar crawl. Drunk Town, USA, population 100 people dressed in the same green shirt celebrating me and my friend’s birthday, bar hopping through Pacific Beach. It.Was.A.Great.Day.  Fast forward to the day before the test, I find myself in the library, and about to begin to study for our test. Apparently I met someone on my bar crawl, and was having a text conversation with. Also at the same time, I was having a text conversation with Cute Funny Girl about where to start studying. Sounds harmless right? It would be, if I could operate my iphone correctly and not mix up the conversation threads. I was literally sitting in the San Diego State library, and started dry heaving once I realized I sent her the “I got real shit faced drunk, met you and don’t remember so good because I’m a douche bag” text. As opposed to the “Hello Classmate! I was wondering if you could direct me where to start this studying, I’m a really hard worker, dependable and a nice guy!” text message I meant to send. FML. And what’s worst is she didn’t even respond to my original question. So now I was dry heaving from anxiety AND I didn’t know where to start studying. Awesome. After that panic attack, I decide it’s time to get serious.  I’m going to third base her. I’m going to add her on facebook. She accepts pretty quickly, and of course, like 99 percent of you do as well when getting a new friend, I facebook stalk the shit out of her. Really cute pictures, looks just as fun and I would think her life would be. Then I see the red flag. You know this red flag, where there’s a photo album, and this photo album has one picture, and this one picture is her and another guy. That’s never a good sign. Never. 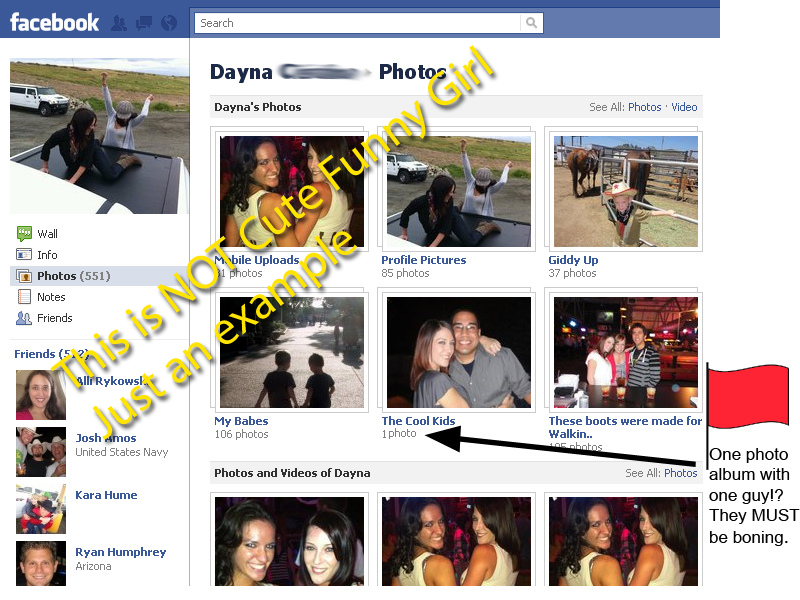 But I still cling onto the hope she’s single, I mean, she’s told me and joked with me about it for the last several months, I’m optimistic it’s got to be true.

Day of the test we meet up to do some more studying, I’m thinking today’s the day, today’s the day, I ask her out for the weekend so we can celebrate the test being over.  I ask her what she’s doing this weekend, she says she’s going home to <insert state>, and it’s a pretty big trip, because this is the first time her parents are meeting her boyfriend. GULP. Le sigh. Pit in the bottom of the stomach, activate now. Oh cool, good luck, how long have you guys been dating? A couple months she says. I went from kind of bummed, to just thinking I was foolish? Did I miss all the signs? I don’t think so? I mean, I literally heard her proclaim her singleness-ism multiple times over the last weeks. Don’t really have an answer  for this other than facebook theory. My facebook theory is, she could no longer tell me she’s single once we became facebook friends and I could see her profile and her pictures? It’s all I’ve got. I’m not like distraught over this, it was just nice/exciting to have a crush for a while. Motivation to go to class on Wednesday nights. Saw her tonight in class, same great banter, same witty conversations, see you next week.

That’s all I got. I miss having crushes. I should bring those back. I also miss when I was a 12 year old girl.

So last blog I put a request out for genius new creative ways to meet girls. You guys had some “great” responses. But I’m not going to do any of those. Unless someone has a baby I can borrow? Or we can make one, I don’t care. Just let me know.  Anyways I’m going to be doing a 2 pronged approach for this little social dating experiment.

Step 1. Cut a hole in the box. Just kidding. The first approach is actually inspired by this:
http://mashable.com/2011/04/20/facebook-ads-for-love/ For those of you that hate reading I’ll summarize. Basically, a guy is taking out targeted facebook ads to find himself a date. GENIUS. I’ve actually played around with facebook ads a little for SingleSteve, but this would be a whole new level of awesome. I’d be curious if it would actually drive in traffic? I mean is there any girl out there that clicks on links on facebook looking for a date? I would need to set up a new site, with “Real” Steve, as opposed to pointing them to Single Steve. I tried to buy DateSteve.com and DateSteven.com, but this guy already owns both, AND used them for exactly the same reason I would have bought them for. Apparently it worked for him, he’s married with a child. So I’m going to need to work out the details of the ads, the landing page, etc. I was actually going to do that this blog, but got uber side tracker by the story above. More to come soon.

Step 2. Put your dick in the box. Except it’s not a box. It’s a deck of cards. And instead of putting your dick in it, you pass out the cards. The idea is pretty cool I think, the companies called Cheek’d. From their website:
Each member receives a deck of calling cards with a series of witty quips and their own personal code. Members can then slip one of the cards to an alluring stranger encountered in their everyday lives – be it in the market, at a restaurant or on the train during a morning commute. The recipient of the card logs onto the Cheek’d website, enters the code, reviews the card-giver’s profile and then can send the card-giver a message for free. So basically I see a hot stranger, walk up to her, slip her my card, walk off into the sunset. She’s so intrigued by what just happened and the clever line on the card, she goes to the website, logs in with the specific card code. We fall in love, and have 1,000 babies. Sounds pretty simple. I got my cards last week, and I’m going to start passing these out. If you guys have any clever ways to pass these out let me know!

So much more I wanted to write, got off topic, blog is super long. I’ll write more soon.  Leave me your thoughts/feelings/concerns.